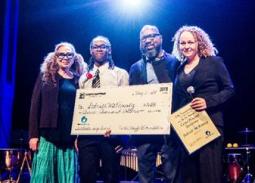 June is Black Music Month and while the celebration of Black music is a regular occurrence at the Apollo Theater, which has taken the opportunity, after a year’s worth of homework, to highlight musician and songwriter Curtis Mayfield with a special Apollo Theater Study Guide.

Get on Board! pays tribute to Mayfield’s life and music and highlights songs that he wrote during the 1960s and 1970s. These songs, often called the soundtrack of the Civil Rights Movement, continue to inspire generations of artists. We hope it will inspire you and your students as well.

With the generous co-operation of the Apollo Theatre’s education group and an assist from the Curtis Mayfield Foundation, the study guide will also be made available to communities beyond Harlem and New York City and Mrs. Curtis (Altheida) Mayfield plans to personally visit schools in these areas and share Curtis’ own musical story which began when he was barely 12 years-old.

The annual scholarship program honors the memory of the iconic Chicago-born songwriter, musician and producer whose prolific career and legacy includes such hits as “Superfly,” “People Get Ready,” “Move On Up,” “Do Do Wap is Strong in Here,” and “It’s All Right”, as well as the numerous soundtracks he created for film.

Upon the announcement of the scholarship last fall, she shared her hope that this initial gesture would be a way for the Curtis Mayfield legacy to reconnect with his Chicago roots and bring awareness of his musical influence there.

Additional scholarships in Curtis’ name are planned for Atlanta, where he spent the past 20 years of his career, and Los Angeles, where he recorded and produced music on many occasions for artists, such as Aretha Franklin.

The Mayfields have also signed an agreement with Lionel Richie’s company to develop a film based on Curtis’ life and Mrs. Mayfield has begun work on a new book about their life together, concluded a deal for a documentary and is meeting with producers on both coasts about a musical based on Curtis’ life.