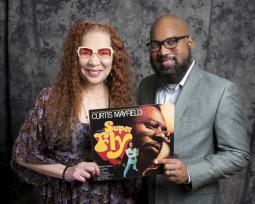 It was released as the soundtrack for the Blaxploitation film of the same name, filmed on location in Harlem.

SuperFly is one of the few soundtracks to out-gross the film it accompanied.

SuperFly, along with Marvin Gaye's What's Going On, was one of the pioneering soul concept albums, with its then-unique socially aware lyrics about poverty and drug abuse making the album stand out.

The film and the soundtrack may be perceived as dissonant, since the film holds rather ambiguous views on drug dealers, whereas Curtis Mayfield's position is far more critical.

Like What's Going On, the album was a surprise hit that record executives felt had little chance at significant sales. Due to its success, Mayfield was tapped for several film soundtracks over the course of the decade.

The Impressions’ “SuperFly” album became an instant classic of 1970s soul and funk, and, along with Marvin Gaye and Stevie Wonder, Mayfield had introduced soul funk music that also said something, a groove that was socially aware.

After SuperFly, movie work began to take up much of Mayfield’s time – Gladys Knight and the Pips (the film “Claudine”), Aretha Franklin (“Sparkle”), Staple Singers (“Let’s Do It Again”), Mavis Staples (“A Piece of the Action”). “Short Eyes” had a 1977 hit for Mayfield himself.

SuperFly was originally released in 1972 on Curtom Records in both LP and 8-track formats.  It also featured distribution in countries outside of the United States, including Italy, Germany, France, Canada, and the United Kingdom.

Curtis Mayfield was a rare American poet, one of the few social commentators who was equally capable of delivering well aimed jibes at the US authorities or, more controversially, often asking difficult, probing questions of his own community. From his 'doo-wop' work in the 1950s through to the spiritual, message laden soul of 60s both as part of the wonderful quartet called The Impressions, Curtis established a reputation for well crafted music laden with meaningful lyrics no matter what the framework or situation.

Superfly was the vehicle for Mayfield to make more of his acutely observed, incisively written, and gently phrased observations on black life in the early 1970s. Aside from the poetry and social commentary, there is obviously the music to accompany the film, one of the better-made and received 'blaxploition' movies of the time.

The original Superfly soundtrack was lauded as a huge step forward for black music by the white music press, as to them, it seemed to equal the maturity of rock concept albums prevalent at the time (even though Marvin Gaye's' Whats Going On? and other similar projects were streets ahead of what noodling prog-rock was offering up in terms of realism).

Vinyl copies of “SuperFly” can be purchased, along with a note from Curtis Mayfield’s heirs, at www.curtismayfield.com.  Mrs. Curtis Mayfield available for interviews.