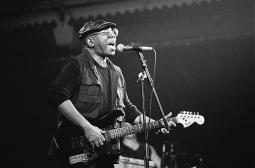 The Songwriters Hall of Fame is adding a new honor to its annual Induction & Awards Gala. Beginning in 2016, the Curtis Mayfield Award will be included in the organization’s scholarship program. The first presentation will take place next June in New York City.

As announced by Hall of Fame president/CEO Linda Moran, the Curtis Mayfield Award will recognize a promising singer/songwriter “whose work reflects the inspiration, spirit and soul” of the late R&B/soul pioneer. Mayfield, inducted into the Songwriters Hall of Fame in 2000, wrote more than 1,700 songs during the course of his career. The singer/songwriter/musician’s catalog includes such iconic songs as “People Get Ready,” “Keep on Pushing” and “Superfly.”

“It’s time to celebrate and re-evaluate Curtis’ legacy,” says his widow Altheida in a statement. “He was a genius who always stood on his own.”

The new SHOF scholarship award coincides with the 2016 celebration of Mayfield’s 60th anniversary in music.  Announced earlier this year, plans for the multi-faceted salute include a documentary, the repackaging of classic material and the release of a recently discovered cache of songs and memorabilia.