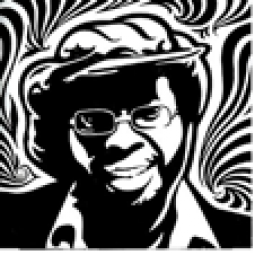 “People get ready,” says Altheida Mayfield, echoing one of her late husband’s best known and most enduring songs.

“It’s time to celebrate and re-evaluate Curtis’ legacy,” she says.  “For years, too many others have tried to claim what he alone did—he was a born genius and always stood on his own.”

Curtis Mayfield is, indeed, heading your way. with a new state of the art website (website:  www.curtismayfield.com) that for the first time tells the full Mayfield story. 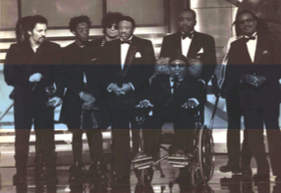 New recording projects, a documentary and a feature film are expected to follow.

A newly discovered cache of material – songs, cassettes, DVDs, memorabilia, and repackaging of classic material – is being prepared, timed for a 60th anniver sary celebration of the Grammy® winner, multiple Rock ‘n Roll Hall of Fame member (solo as well as group) and one of Rolling Stone’s 100 Greatest Artists of All Time and one of its Greatest Guitarists of All Time. (right, Curtis receiving Lifetime Grammy from Bruce Springsteen)

Next year marks 60 years since Mayfield’s professional debut, with the Roosters, the forerunner of his later group, The Impressions.

Mayfield died in 1999 after a four decade career at the top of his game as label owner, singer, songwriter, producer, multi-instrumentalist, mentor, funk/soul innovator and social activist.

His last decade was spent as a quadriplegic, result of an onstage accident, but he recorded to the end – even lying on his back in the recording studio to get enough breath to sing.

“Broke his spine, but not his spirit,” says Altheida Mayfield, his wife of more than 30 years, mother of his seven children, Keeper of the Flame and Guardian of All Things Curtis, along with son, Kirk.

It has taken over a decade to get things together, to search through Mayfield’s estate and legacy but there are new Mayfield compositions (mainly from tapes found in the Mayfield Atlanta home that also served as his recording studio), video footage of concerts and interviews (some going back to The Impressions) that will be made available in DVD format.

Also in preparation: repackaging and digitally improving some Mayfield classics, working from original master recordings, including some long thought lost.

“For instance, they even found original materials in South Africa, of all places,” says Altheida Mayfield.

“It’s all taken a lot of time, a lot of people, because Curtis was a multi tasker---before they thought of the phrase.

“But we are getting it sorted out and I think finally Curtis is going to get the respect he deserves, respect that hasn’t been given him since he died. 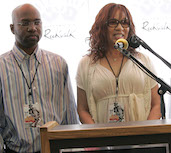 “He was one of the giants, you know. Just look at what he accomplished… ”

Mayfield began his career in typical fashion, straight out of his grandmother’s Traveling Soul Spiritualists’ Church and right into Chicago’s North Side soul music scene and The Impressions. 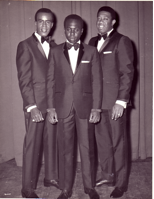 “There’s something called the Chicago Soul sound that began in the late Fifties,” recalls Jerry Butler, group member, solo performer, now a Chicago politician. “The Impressions pioneered that… and Curtis was the heart of The Impressions. “ (Young Curtis & The Impressions, right).

But Mayfield started writing a different kind of soul music, one that crossed more than just musical boundaries, songs such as “Keep On Pushin’” and “People Get Ready,” reflecting his awareness of political and social concerns among black people. Martin Luther King embraced this side of Mayfield’s work, adopting Mayfield’s ”Keep On Pushin’” as an unofficial anthem while “People Get Ready” was second to “We Shall Overcome” on Washington civil rights marches.

“The songs were,” Mayfield once told an interviewer, “an example of what has laid in my subconscious for years….the issues of what concerned me as a young black man.”

“Superfly” - took Mayfield into Hollywood movies where he again made some changes to the status quo. “Superfly,” the soundtrack to a celebrated blaxploitation movie, was Mayfield’s biggest album and another big brick in his wall of fame.  He wrote, performed and produced it himself, surprising the movie studio heads.

“We showed them you didn’t have to have a room the size of a football field to lay music in,” Mayfield noted. Others noted the Mayfield One Man Show, copped the idea and a trend of self produced movie soundtracks followed.

Despite the vagaries, twists and turns of the record business that affected Mayfield – can you say Disco? – Mayfield forged ahead and his reputation with his fellow artists never diminished. Aretha Franklin, Gladys Knight and assorted Pips and many others found his producing and writing skills valuable in the studio and – importantly – on movie soundtracks.

Regarding those recording his songs, the line forms on the left: Bruce Springsteen, Elton John, Aretha Franklin, Gladys Knight, Steppenwolf, the Staple Singers, Rod Stewart, Eric Clapton, Lauren Hill, Aretha Franklin, Herbie Hancock, Fishbone, Sinead O’Connor, UB40, The Jam – all have Mayfield material in their portfolios.  He crossed over into the hip hop generation with Public Enemy and Ice T as well as others either recording or sampling this distinctive musician’s output.

Bob Marley, reggae’s icon, paid the ultimate compliment with “One Love,” that sounds like another version of “People Get Ready.”

But for all this, the man they called the Gentle Genius, who wrote and produced more than 1,700 songs in a lifetime – too short – in music, whose creativity influenced Chicago soul and sampling hip hoppers, does not, his widow insists, get the respect he has earned.

Which is why she is naming 2015 and beyond – “The Curtis Mayfield Years.”