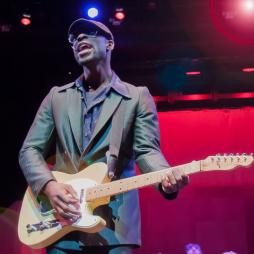 Black Ensemble’s tribute to Chicago’s own music legend Curtis Mayfield is the story of a musical giant
who is equally celebrated as a singer, song writer and record producer. From the anthemic music of The
Impressions like “We’re A Winner,” “I’m So Proud,” “Choice of Colors” to movie hits like “Super Fly,” The
Curtis Mayfield Story will bring to vibrant life the rare musical genius that was Curtis Mayfield. Mayfield’s
timeless music is known and celebrated all over the world, and he is the winner of the Grammy Legend
Award (1994), the Grammy Lifetime Achievement Award (1995) and a double inductee into both The
Rock and Roll Hall of Fame (1991, 1999) and the Grammy Hall of Fame.

Jackie Taylor comments, “Curtis Mayfield’s music and influence is legendary, not just in Chicago, where
he was raised in the Cabrini-Green area and where he started his career—but nationally and
internationally. From his hits with Jerry Butler and The Impressions to his Civil Rights Anthems to his
award winning musical film scores, his music speaks to this country’s cultural history, as much as it
entertains. We are thrilled to have the Black Ensemble musicians and a stellar Black Ensemble cast led
by Reginald Torian of The Impressions and Cecil Jones bring this important story to life.”